Introducing Your Puppy To Housemates

Introduction to an adult dog:

One of the most exciting parts of bringing your new puppy home is introducing them to the family both human and animal. If you have other dogs or cats in your home it will take some time for them to acclimate to one another.

Hopefully, you have already done your homework and you’re introducing a puppy that is appropriate for your family. A dog in their late senior years may have difficulty with a young active puppy. A cat who is timid and shy will have a more difficult time adjusting to a puppy than a cat who is very social and outgoing. It is important to have realistic expectations. The introduction process is not always quick and simple. It can take some time and patience. While the vast majority of pets will learn to live together peacefully, they do not always become best buddies.

When introducing your puppy to your adult dog, arrange their first meeting on neutral territory and outside if possible. Your puppy will likely act like a typical puppy and immediately want to play. They no longer have littermates to wrestle around with so they will look for another playmate. Puppies are still learning social skills so they may annoy an adult dog until the ground rules are established. It is common for the adult dog to growl or even be afraid of the puppy. We don’t want to punish the growl as that is their way of communicating that they are uncomfortable with the situation. During an appropriate interaction, the puppy backs off when the adult dog growls or bares teeth and the adult dog stops reacting once the puppy moves away

Interactions should always be supervised. If the adult dog shows signs of being uncomfortable, the puppy should be removed to give the adult dog a break. Even once they are able to be loose together in the house, be sure the adult dog has plenty of opportunity throughout the day to be away from the puppy. It is best to feed them separately until you are very sure there won’t be any resource guarding.

Taking the two dogs on walks together is a great activity. Reward both dogs for good behavior when they are together. Support the adult dog by giving them the important resources first (food, petting, etc) while also giving the puppy plenty of attention.

Introduction to a cat:

At first, your puppy and your cat should remain completely separated. This is most easily accomplished by setting the cat up in a room with everything they need (food, water litterbox, etc) and allowing them to smell one another on the other side of the door. You can also take a small towel and transfer scents by taking turns rubbing a towel on each of them. Once they both seem comfortable with this step, you can move on.

The next step is to allow them to see each other but not physically contact each other. You can put 2 baby gates on top of each other in the doorway. Reward both of them for calm behavior. If the puppy starts to fixate on the cat too much, use a food reward to get their attention on you instead.

The final step is to have them in the same room. The puppy should be on a leash. Watch them both closely for changes in body language that might indicate fear or in the puppy’s case getting too excited.

While we are concerned about the cat being injured by the puppy either intentionally or accidentally, puppies are frequent victims of cat claws to the eyeball. They need to learn to be gentle with the cat but it is best for us to intervene before getting to the point that the cat feels they need to defend themself. During this entire process call a timeout and separate them at the earliest sign of a problem. Do not wait until they escalate. 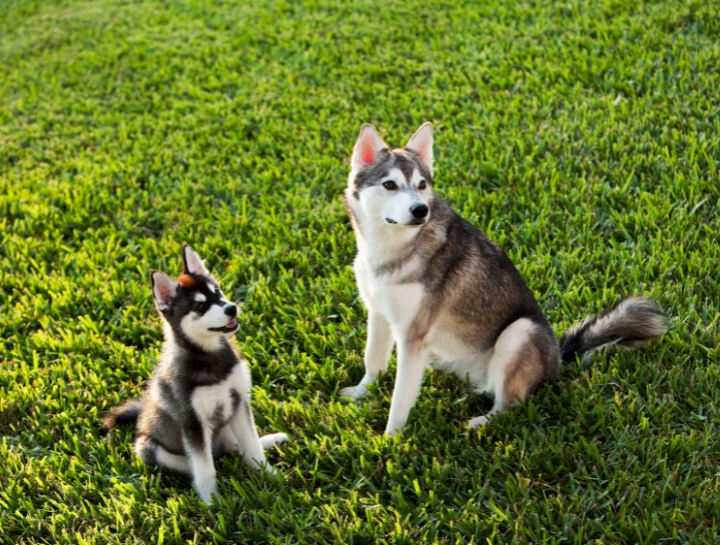